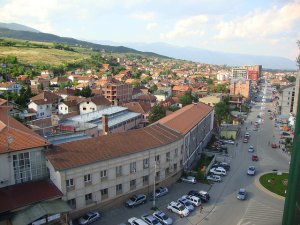 Peja is a city in western Kosovo, and the administrative center of the homonymous district. The municipality covers an area of 602 km², including the city of Peja/Pec and 95 villages; it is divided into 28 territorial communities. The charming little city of Peja is located at the foot of the impressive range of mountains Bjeshket e Nemuna separating Kosovo from Albania and Montenegro and across both banks of the Lumbardhi river. During the last years, Peja has dragged itself out of the post-conflict doldrums and positively reinvented itself as a major hub for tourism and business. Bursting with history and populated with some of the friendliest people you’re likely to meet in Europe, Peja is surely one of the best cities to visit in Kosovo The city has been ruled by different dominating powers throughout history, giving it a diverse cultural character. The Orthodox influence has resulted in the construction of impressive religious sites and monasteries. UNESCO world heritage site is the Pec Patriarchate, built during medieval Serbian empire. Under Ottoman rule Peja took on a more oriental character with the construction of narrow streets, old-style Turkish houses and mosques. One of these is the Bajrakli Mosque, built by the Ottomans in the 15th century, from the remains of Serbia medieval Monastery of Holy Archangels. You can even find traces of the brief presence of the Austro-Hungarian Empire in the early 20th century in the shape of some handsome buildings in the city center, as well as some massive socialist buildings and apartment blocks. The mountains bordering the city form an extraordinary background, and are a great place for all kinds of outdoor activities like hiking, skiing or rock climbing. Visit Peja and book hotels in Peja here!